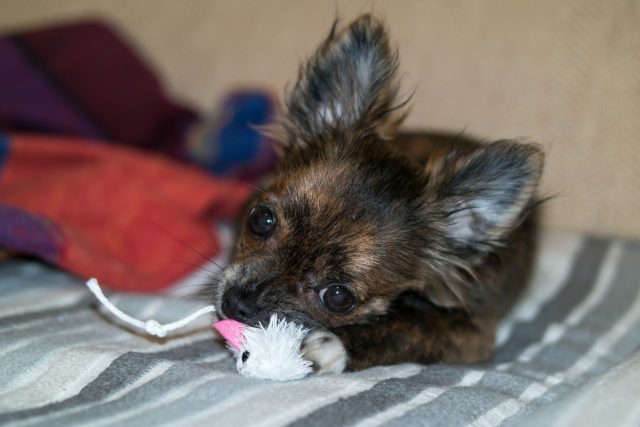 Crying in a shelter does not help the scared dogs who need a home. So Angela Dan never did every time she goes to foster a dog. But Freddie was different, she just melted Angela’s heart, and she could not hold back a few tears.

Angela drove four hours to get this poor dog. When Freddie was given to Angela, he was wrapped in a blanket. Angela did not realize how tiny she was until she was able to hold her.

He was very skinny, and his paw was not quite normal. She found out that seventeen of Freddie’s teeth were removed and his legs were spayed out. Freddie was also underweight and scared.

This does not look like a dog who had a good life. Medically, it will be a challenge to take care of Freddie, but Angela was ready to take care of him. She knows that he is so deserving of it.

Angela knows when a dog is thankful, and Freddie shows his gratefulness for Angela multiple times. Freddie knows that he is safe and properly cared of. Angela has even taught him a trick called the T-rex which he has mastered.

Freddie is just the cutest thing when he does that trick. There are people who have questioned Angela why she still fosters special needs animals when they can pass away anytime. Her answer is simple.

When the dogs look at Angela with pure gratitude, she knows that she is doing something right. She will be never tired of taking care of her foster dogs as she knows that they all deserve the best of life.