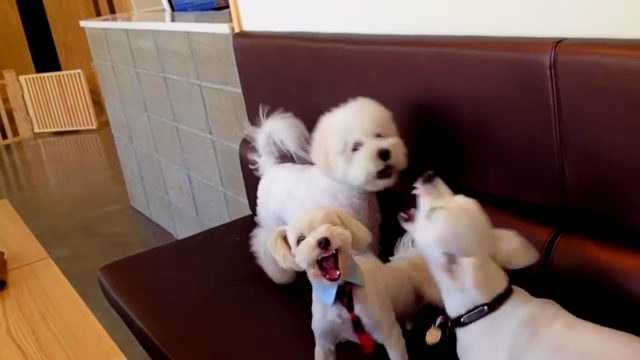 When you have multiple dogs in your family, there will be times that their rough-housing may turn into a scuffle. This is something normal that all dogs do. But for one of the pooches in this video, every dog should just always play nice.

There will be times when your dogs would play a bit rough with each other. They would nip at each other’s ears and legs and even wrestle. Most of the time, this type of play is perfectly harmless. It may just sound like it isn’t.

For this particular multi-dog family, two younger puppies were caught doing just that. They were quite at first with the bigger puppy trying to get a hold of his little brothers leg. However, even if his brother was bigger than him, the other little puppy was not having any of it. This is when the barking started.

The little dog was fierce as he tried to get dominance over his big brother. He was even standing on his hind legs to get the upper hand while he barked his protest. But luckily, this standoff between to two pups would immediately come to a stop.

Big brother to the rescue

As the noise from the fight grew louder, this caught the attention of the pup’s bigger brother. A toy poodle who was a bit older than them. He came into the room where the two were at and promptly sat on the couch where their tussle was happening.

He then put a stop to their fight at once. You could see him barking at the bigger dog as if he was telling the younger pup that they should know better than that. Even after the young puppies were already calm, he still was barking at them probably to tell them off about their behavior. This only shows why it is better having more than one dog in your home, the dogs are there for each other to help them become better.

Check out this video: