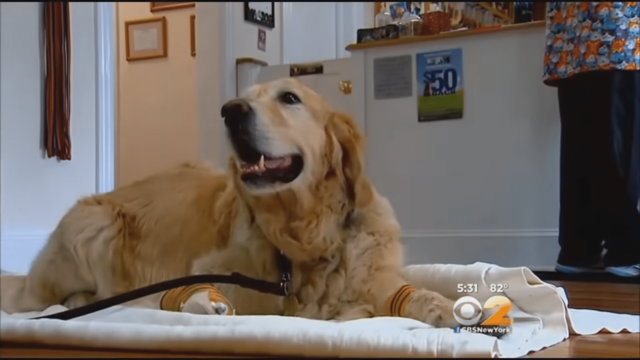 Service dogs are there to help the people who are in need lead safe and as normal lives as their disabilities can allow them to. They are guides that help their companions to steer clear of obstacles as they walk. However, this particular service dog has gone above and beyond his service to save the life of his charge.

Figo is an eight-year-old Golden Retriever who is the latest companion and service dog for Audrey Stone who is legally blind. They were simply crossing the street when suddenly the dog noticed that there was a bus speeding towards them while they walked. This is when Figo immediately switched to the other side of Audrey to put himself in between his companion and the danger.

This caused injuries to both dog and owner but luckily, both of them survived. Figo’s front legs were run over by the bus’ wheel and had to undergo surgery to prevent him from losing his legs. However, it is because of this incredibly heroic pooch that both of them have made it through that horrible accident. The police say that the service dog did not even cry out in pain but waited by his companion until she was able to get the help she needed.

Today, both Figo and Audrey are on their way to recovering from the injuries that they sustained that day. But you could see it in the face of Figo that he is still happy and cheerful even if both his front legs are plastered. All his just waiting for now is to be reunited with his companion again.

Service dogs can do a lot of things to help those who are in need of them. But thanks to Figo, you can really see that these dogs can go above and beyond their training just to help their companion in need.

Check out their video: