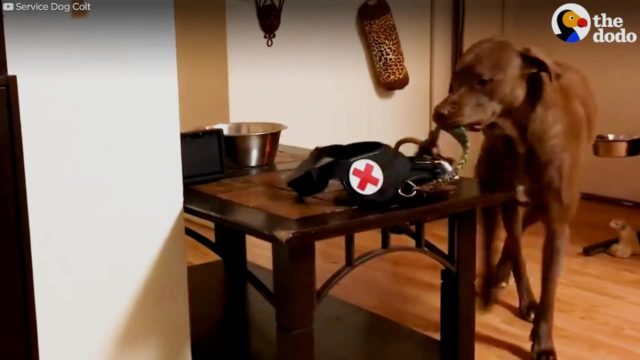 It is hard to go through a major health problem that leaves you unable to control your body or even take care of yourself properly without having to ask help from others all the time. This same thing can be said for this woman after her brain injury. Luckily, she was able to find help in her service dog to make things much easier for her.

Helping out his mom

Colt is a very special service dog who was specifically trained for a specific person –  his mom. This is because his human suffered from a major brain injury that has left her not only having difficulty walking but also experiencing seizures and fainting. She is also currently using a wheelchair since she is still undergoing physical therapy for her to be able to walk properly again.

More than a companion

Because of this, Colt has been not only a companion for her but also the best helper that she could ever ask for. He brings her anything she may need and can even open up the refrigerator to get her a drink or some food. But the most important role that Colt plays is seizure patrol.

Colt like most dogs have very sensitive senses. This sensitivity helps him predict when his mom is about to have a seizure. When it comes, he knows just what to do to get his mom out of that state. He licks her arms and face to help wake her up. He even gives her pressure therapy by laying on her while he listens to her heartbeat. Once the seizure subsides, he is also able to get her the medication that she needs without her having to strain herself to stand up from the bed.

Although he is still a regular dog that has his goofy and playful moments, he is always there to be relied on whenever he is needed.

Check out their video: