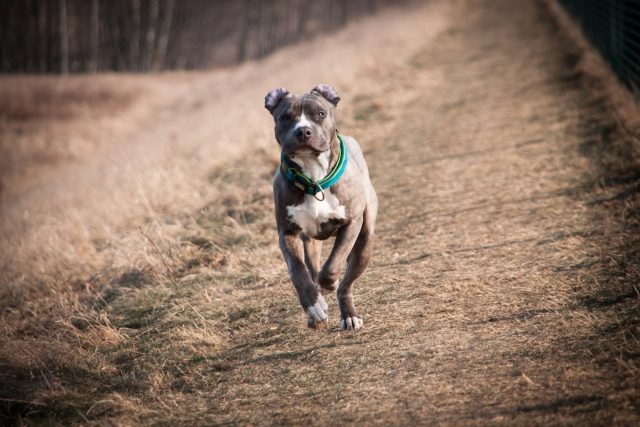 Senior dogs are usually the least to get adopted due to their age and health issues. It’s even more challenging when that senior dog is a pitbull who has been tagged as dangerous by society. This stereotyping has been going around for years, but more and more people are trying to change people’s minds.

Since Zolton was rescued, it has been around three months until he was finally adopted. He is one of the lucky who actually gets a home that would love him. Zolton’s tail was wagging hard when he saw his mom for the first time.

He could tell that his future is with this woman and he will be loved. It was time for him to go to his forever home. There was a sign of relief in his eyes. Joe, the rescue trainer, brought Zolton and his new mother, Cynthia home. There, he started sniffing around to get familiar with different scents of his new environment.

When he got there, he does not even know how to play with a toy. It seems he never learned from his previous owner. About a month in, Zolton was finally able to adjust to his new life.

He now enjoys going for walks too! There is just something about dogs with horrible experiences that no matter what they have been through in life, they end become so forgiving and can still be so trusting. Some of the senior dogs like Zolton may never have a happy day in their lives, but Zolton was one of the lucky few who gets to.

His mom has rescued his life, and Zolton knows it. Because of what Cynthia has done, Zolton will not know pain anymore. From here on out, he will only learn love and affection from his parents.

Saving a senior dog’s life is one of the sweetest things anyone can do for a dog.