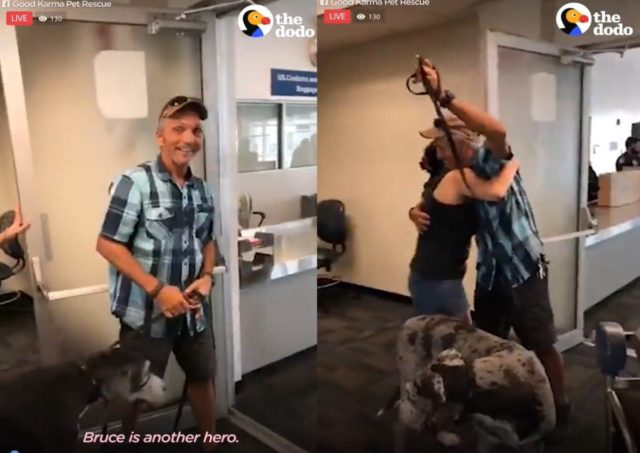 The first instinct that most people do when natural calamities come is to secure their safety and their loved ones’. Sadly, some owners often forget that pets are families too and do not include them in evacuating danger zones.

One man in the Bahamas documented how he bravely waited out the hurricane Dorian together with his pets in his home. Bruce Claridge took a video of himself, sharing that the storm is coming in closer into their home.

In the video, he showed how strong the winds blew. He urged the people watching his video to say a prayer because he knew that it would take a while before the storm passes.

Bruce took a video of himself together with his pet dogs, Mushy, and Bella. After he described Mushy as his big old baby, he went on to show his other pup named Bella.

Bruce knew that his Great Danes were obviously frightened because of how strong the winds were. Bruce was calm despite how terrifying the situation was outside his home.

He tried to book a flight that would take him, his dogs, and his wife’s pet cats, out of the Bahamas, but he did not succeed. Bruce loved his dogs so much that he could not bear leaving his dogs alone in the storm.

Bruce risked his life by staying in his home just so he could be with his Great Danes and his wife’s cats. He tried to make do with the little supplies he has left in his home, while he waited for the storm to calm down.

Fortunately, Bruce was able to get in touch with an animal rescue group. He coordinated with them to help save the other stranded dogs on the island.

Thanks to Bruce’s bravery, not only did he save himself and his pets, but he also rescued other dogs in need. Many people even applauded Bruce for being so thoughtful of those in need.